(Ottawa) — The Ottawa Police Service is looking for the public’s assistance in identifying 2 suspects involved in a personal robbery, which occurred on August 21, 2018 at 5:06 pm, in downtown Ottawa.

On August 21st 2018 at 5:06 pm, a young male was walking in the area of the 100 Block of Rideau Street when he was attacked from behind. The victim was put in a bear hug from behind and slammed onto the ground. The suspects stole a cellphone and attempted to steal the victim’s backpack. A 3rd suspect, who is a minor, was arrested shortly afterward.

The first suspect is described as:

The second suspect is described as: 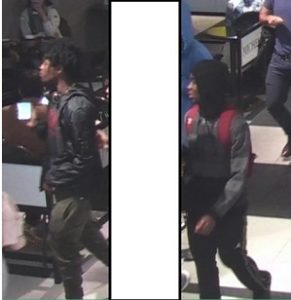