Suspect to be identified in B & E

Suspect to be identified in B & E

The Ottawa Police and Crime Stoppers are seeking the publics assistance to identify a suspect in a  B & E.

On February 17th 2018 a break-in was reported at 1300 block of Meadowlands Dr. Subsequent investigation revealed that a room mate of the complainant had hosted a party while she was out of town. The room mate left a number of unidentified males inside of the unit unattended and numerous electronics were stolen from the complainants room.

Video evidence shows one of the males exiting the front door of the building with a large television. should you know the identity of the suspect or any of the males he was accompanied by earlier in the night.

If you know the identity of the individual call the Ottawa Police Service West Break and Enter Unit (613) 236-1222 Ext 2655 or Crime Stoppers toll-free at 1-800-222-8477 (TIPS) should you know the identity of the suspect or any of the males he was accompanied by earlier in the night. Remember Crime Stoppers does not subscribe to call display, we will not ask your name or record your call and you are not required to testify in court. If your information leads to their identity, you could qualify for a cash reward of up to $2000. You can follow us on Facebook, YouTube and Twitter. 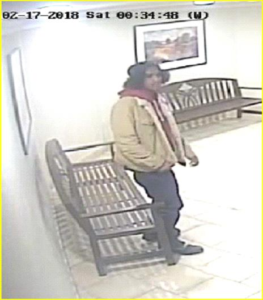