Suspect to identify for robberies in LCBO stores in January

Suspect to identify for robberies in LCBO stores in January

(Ottawa) –The Ottawa Police Service Robbery Unit is looking to identify a male suspect wanted for Robbery and Theft.

This male is responsible for Robbery and Theft under at two separate LCBO stores in Ottawa:

On January 8, 2018, the male entered an LCBO on Strandherd Road and he selected numerous bottles of alcohol and concealed them on his person. The male then left without paying.

On January 25, 2018, the same male entered an LCBO on West Hunt Club Road and he selected numerous bottles of alcohol and concealed them. As he was leaving the store, he was confronted by staff. The male pulled out a small wooden bat from his coat and swung it at the staff before leaving. No injuries were reported.

The suspect is described as an Asian male, 25 to 30 years old, average height and weight. In the first incident, he was wearing tan pants, a black coat and white hat (see pictures).

Anyone with information regarding these robberies, or any other robbery, is asked to call the Ottawa Police’s Robbery Unit at 613-236-1222, ext. 5116. Anonymous tips can be submitted by calling Crime Stoppers toll-free at 1-800-222-8477 (TIPS), or by downloading the Ottawa Police app. 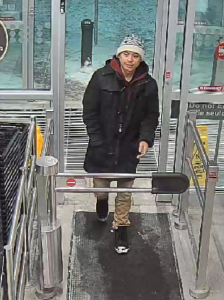 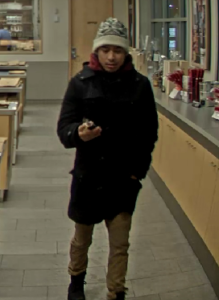 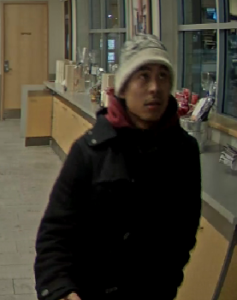