(Ottawa) — The Ottawa Police Service Robbery Unit is investigating the December robbery of a taxi driver and is seeking the public’s assistance to identify the suspect responsible.

On December 3, 2017, at approximately 3:00 am, the victim, a taxi driver, picked up three persons at a pub along Meadowlands Drive. Once near their destination, the passengers were changing their minds with respect to where they wanted to be dropped. It became apparent to the driver that the circumstances were becoming suspicious and he pulled over to drop the passengers and collect the fare owed. The two rear passengers exited but the front passenger remained. That passenger then threatened to shoot the driver. That suspect ripped the debit machine from the dash, and also took a small quantity of cash from the driver. That suspect was then seen to enter a gas station near Baseline Road/Clyde Avenue.

Police are seeking to identify the suspect, and are today releasing good quality images from the gas station that he entered following the robbery (see images attached.)

Anyone with information regarding this robbery, or any other robbery, is asked to call the Ottawa Police’s Robbery Unit at 613-236-1222, ext. 5116. Anonymous tips can be submitted by calling Crime Stoppers toll-free at 1-800-222-8477 (TIPS), or by downloading the Ottawa Police app. 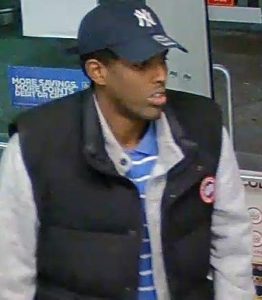 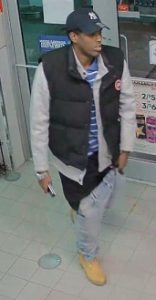