(Ottawa)— The Ottawa Police Service Break & Enter Unit is investigating a recent break & enter into a commercial premise and is seeking the public’s assistance in identifying the suspects responsible.

On Sunday, November 4, 2017, at approximately 8:00 pm, two suspects arrived at a commercial premise situated along the 2300 block of St. Laurent Boulevard. The suspects were observed exiting a van with pry bars. The suspects pried open a door and returned to the van and fled a short time later. The suspects removed some items from the premises.

The suspects are described as:

The vehicle is described as possibly being an older Kia Sedona, grey or similar, with tinted rear windows, a roof rack, and no front plate. 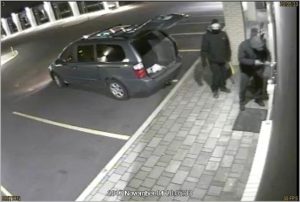