(Ottawa)— The Ottawa Police Service Break & Enter Unit is investigating several recent break & enters inside an apartment building and is seeking the public’s assistance in identifying the suspect responsible.

On September 12, 2017, during the later afternoon hours, several unlocked apartments, situated in a building along the 3500 block of Rivergate Way, were entered into by a lone female suspect. In one instance, a quantity of cash was later discovered missing. In two instances, the suspect opened the door and was confronted by the occupant. The suspect suggested she had the wrong apartment and quickly left.

Investigators are also reviewing similar occurrences at other addresses, across the City, in 2016 and 2017.

If you know the identity of the individual call the Ottawa Police Service Break & Enter Unit (613) 236-1222 Ext 3515 or Crime Stoppers toll-free at 1-800-222-8477 (TIPS). Remember Crime Stoppers does not subscribe to call display, we will not ask your name or record your call and you are not required to testify in court. If your information leads to their identity, you could qualify for a cash reward of up to $2000. You can follow us on Facebook, YouTube and Twitter. 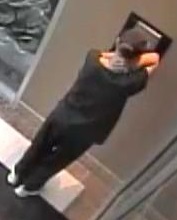