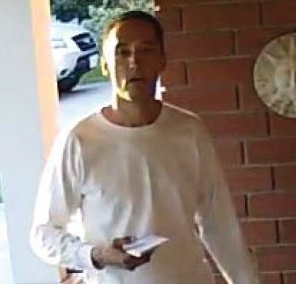 The Ottawa Police Service Break & Enter Unit and Crime Stoppers are seeking the public’s assistance in identifying the suspects responsible in a recent residential break & enter.

On May 28, 2017, at approximately 8:25 pm, police responded to an entry alarm at a residence situated along the 0-100 block of Rodney Crescent. On arrival, police became aware that the residence had been forcibly entered and that the suspects responsible had fled the scene. Suspect # 1 approached the front door, became aware of the camera, and walked away, off camera. Suspect # 2, disguised, then approached and forced open the front door. It appears nothing was taken in the short time the suspect was inside the residence. The home is equipped with surveillance cameras that captured images of the two suspects.

#2-Caucasian male, black sunglasses, black or dark brown hair, balding at the top rear. Wearing a white long-sleeved shirt, blue jeans, and distinctive shoes that appeared to be beige with red on the sides.

Anyone with information regarding this break & enter, or any other break & enter, is asked to call the Ottawa Police’s Break & Enter Unit at 613-236-1222, ext. 3515 or Crime Stoppers toll-free at 1-800-222-8477. Remember Crime Stoppers does not subscribe to call display, we will not ask your name or record your call and you are not required to testify in court. If your information leads to their identity, you could qualify for a cash reward of up to $2000. You can follow us on Facebook, YouTube and Twitter. 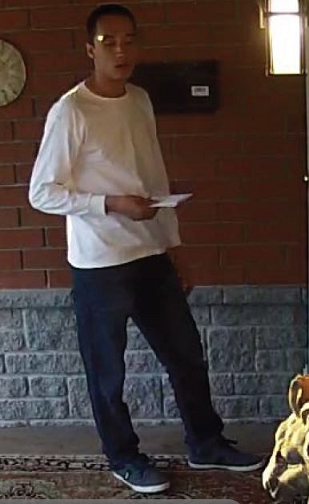