The Ottawa Police Service Robbery Unit and Crime Stoppers is seeking the public’s assistance to identify the suspect responsible for a convenience store robbery on Carling Ave.

On March 28, 2017, at approximately 8:30 am, a lone male suspect entered a convenience store situated along the 2900 block of Carling Avenue. The suspect, fully disguised with a mask, made a demand for cash and advised he had a knife. The clerk attempted to chase the suspect from the premises however the suspect was able to get behind the counter and grab the tray from the register. The suspect then fled the premises with the cash tray in hand. There were no injuries. The suspect was last seen running along Grenon Avenue by witnesses. Police located a knife behind an apartment building east of Grenon Avenue. The suspect is possibly believed to have entered a building nearby.

The suspect is described as male, approximately 5’9″(175 cm), thin build, English speaking with no accent. He was wearing a black 3/4 length winter coat with fur on the hood a dark-coloured bandana around the bottom portion of his mouth/face (images attached.)

Anonymous tips can be submitted by calling Crime Stoppers toll-free at 1-800-222-8477. Remember Crime Stoppers does not subscribe to call display, we will not ask your name or record your call and you are not required to testify in court. If your information leads to his identity you could qualify for a cash reward of $2000. You can follow us on Facebook, YouTube and Twitter. 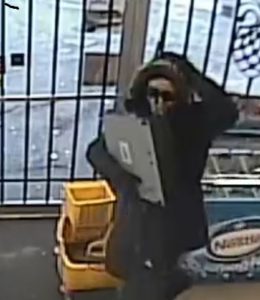 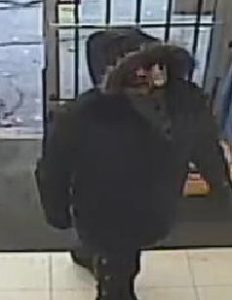